Home » Blog » Of my father, the car he drove and his children

The journey may not make sense…

My father drove a Peugeot 404, Station Wagon, registration number 65-718 G. He loved it. I can still smell the inside of that car. It was a strange mixture of dust and petrol on plastic seats. There must have been a leak in the tank and the door rubbers were too worn out to stop the dust from getting into the car. My father’s hair, his beard and the hairs in his nostrils would always trap the dust, giving him a creepy look. He never seemed to care but for us, the nausea from inhaling dusty petrol fumes was unbearable.

Police road blocks were uncommon then, so it was possible to drive from one point to another without ever stopping. Besides, my father didn’t like to be stopped on the way. We would not even dare ask for recess. He was always eager to get to the end of the journey as quickly as possible. Some of us who were small would be bundled into the boot and once the boot was shut, usually with a loud bang which only father knew how to do, it would be silence until we got to our destination. In fact, I do not recall seeing him in conversation with my mother along the way. Maybe we were too far in the boot of the car to notice the exchanges, but I have my doubts. My mother was not always happy with these journeys (they took place often) and she was naturally slow in getting things and herself ready for the trip. We would all be packed up in the car and she would still be doing her final touch ups in the house. My father would go berserk and would start driving away in an effort to get mother to be quick. She didn’t like it at all and for that reason there would be no talking all the way.

…but the destination is more important

While my mother was not always keen on these journeys, she looked forward to the destination because at least she could be free from the cold war that was so close to her in the front of the Station wagon. To us in the boot of the car getting to the destination could never have been over celebrated. It meant total freedom. Finally, we could breathe fresh air. We could sense, too, a certain freedom on father’s face as he dusted the dirt off his head, beard and blew out the dusty mucus from his nostrils. My mother would give him a wicked, killer’s eye but would say nothing. Father wouldn’t flinch an inch. He was not scared of that eye anymore. Anyway, we now had to offload this super car. I always wondered how all ten or twelve of us would fit in that car and how that same car managed to carry all that luggage. It did not matter whether we were going or coming, we always had plenty to carry. One of my brothers once dared ask my mother why we always carried so much luggage. Immediately he regretted asking that ‘silly’ question. He got the eye and was lucky not to be within arm’s reach.

We would eventually get all the bags into one place and proceed to beat off the dust with cloths. The most important bags would then be taken into the house first. Usually this would be the bags with food that mother would warm up, first for father and then for the rest of us. That’s the way it was. Always.

The following morning was always dedicated to cleaning up the super car. We had to be up early, never mind that we had come from a crippling journey, what with legs crisscrossed for over sixty to seventy kilometres. My father disliked a late riser. ‘The sun must not find you in your blankets,’ he would say. ‘Let it find you outside, already busy with work.’ He would literally kick us out of bed and then go back to sleep himself. What manner of man is this? I wondered, then.

We had to be very careful with the water. We were not allowed to use the hose pipe lest we fill the car up with water. Remember, the door rubbers were all worn out. How did we travel on rainy days? There weren’t many rainy journeys but I’m sure my father always made a plan.

With the car nice and clean and with the sun way up in the sky, father would call my elder brothers to go out for a drive. He would take them to the straight road out of town and then stop the car on the shoulder of the road, kill the engine and move over to the passenger seat. That’s how I also got the feel of driving a manual engine. That is where I got the motivation to drive a car. Anything could have happened and I am sure mother had plenty to say to him about that, but father wanted to be the first to introduce to his children the skills of operating an automobile.

This was the same man who forced his children to go to church when he never set foot in one himself. I look back and all I see is sacrifice and a tough kind of love. Thank you, father and rest in eternal peace. 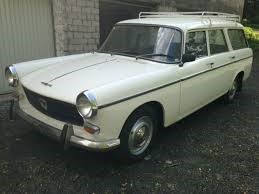